Drupal 7 tip: How to change the jquery autocomplete callback on event

I ll explain how to change the autocomplete callback on an event.

After some long reading in several issues on drupal.org. Here is the solution:

Now you need a core patch otherwise some the views ajax and some other jquery will stop working. The core patch is here:

This module has the potential to fill the form theming gap. For now it is still in alpha but it has potential.
It uses jquery to arrange your form elements. Takes into account fieldset (but not the field in the fieldsets).
It does not integrate with the multistep module.

This small drupal module includes the jquery scrollTo plugin. http://plugins.jquery.com/project/ScrollTo It integrates with the http://drupal.org/project/jq module which aggregates jquery plugins for easy administration.

In this custom jquery interface scrollto is used to maintain scrolling when the middle collumn row has a focus. The middle collumns focus is determined by either clicking or tabbing through the right form. So when the we would tab up the element receiving the yellow class would get out of sight. Using the scrollto plugin allows us to keep the row in sight. (Going from screenshot one to two only using shift-tab)

This interface has some more to it than only the scrollto plugin. The left collumn contains athletes that are userreferenced to the session node which we are viewing. Clicking on an athlete row will do an ajax call and fill in the second collumn with testresults for tests referenced to the session taken by the athlete, the third collumn will be filled with a custom form to capture results on these tests for the current athlete. Capturing results is done on autosave, which means an ajax callback (using ahah) is done when the value of an input field changes. Testresult nodes are created on server and when ahah returns the form another ajax callback is done to retrieve the new results for the middle collumn. The http://drupal.org/project/ajax_load is used to load additional javascript into ajax loaded content like we have in the second and third collumn.

The interface is build to submit results by athlete and by test using the same jquery. 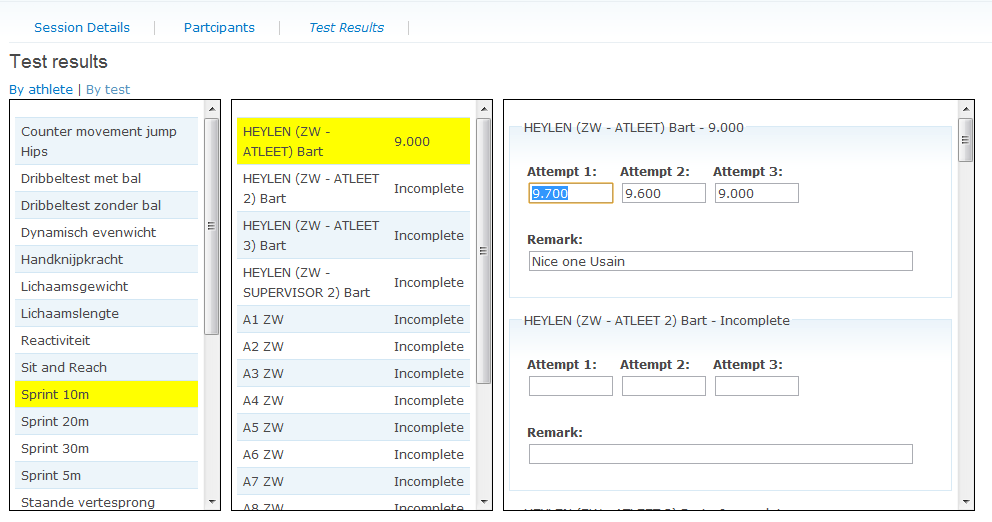 More on it and code snippets will be posted soon.

This drupal module allows the http://drupal.org/project/jquery_multiselect module (which include the jquery ui multiselect plugin) to be included as a cck widget.

This drupal module includes the jquery ui multiselect plugin. http://quasipartikel.at/multiselect/
It integrates with the http://drupal.org/project/jq module which aggregates jquery plugins for easy administration.

The jquery multiselect widget is now available to drupal by using these two projects:

For more on the jquery ui multiselect http://quasipartikel.at/multiselect/

Drupal Jquery : How to add a setting from php to your jquery script

In this post adding a setting from php to your jquery script will be explained through an example: Adding an api key as a variable to our query script.