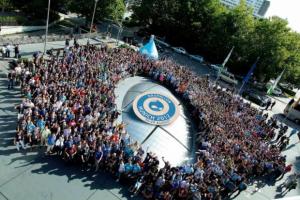 This is the first part of a two-piece long read on DrupalCon and how we can make it better by involving the business side of things.

In this blog post, I will share some thoughts that came to mind during the latest DrupalCon in Vienna. All the views expressed here are my own and do not necessarily reflect those of Dropsolid, my company.

DrupalCon Vienna proved to be highly engaging from my point of view and I think there is more work that needs doing to make the Drupal community and ecosystem stronger by involving the business side of things. Before I dive into this, I would first like to share a bit of history on how I experienced DrupalCon and how it has impacted me. You’ll need this to understand my point of view – so please bear with me!

My first DrupalCon was Munich 2012, which to me will always remain the most special DrupalCon I have ever attended. I had already been a member of the Drupal community for five years as a developer before I finally attended my first conference - and I’ve been a regular DrupalCon attendee ever since. In some way, being together with all the other Drupal developers made me feel part of something bigger. This powerful feeling confirmed that all the work we were doing around Drupal was totally worth it. I felt a sense of trust and belonging.

How DrupalCon meant everything

That feeling of belonging is exactly what made me stick with Drupal in the first place, over a decade ago, when Thomas Bonte introduced me to Drupal.

Prior to learning Drupal, my student life and career path hadn’t been the success that I had envisioned.
Although I felt I had potential, school wasn’t really the right place for me and I was really frustrated with myself not being able to make it a success. I had spent quite a few years in higher education and ended up as a chemist in a lab, constantly being ordered around. This felt really soul-crushing and I immediately realised I would have to figure something out to escape. I quit the job in the lab after a week and started looking for a plan. It was 2006, and I thought that the internet that the potential to turn into a bit of a thing one day. I decided to sign up for a PHP course, which was a sponsored thing by the regional Flemish government at that time. In order to successfully complete the course, I needed to finish a 6-month internship. Thomas Bonte and I built a large one-million-user community site in Drupal 5, which had just been released. We launched in February 2008. It was an awesome experience to see all these users use the community site. Thanks to Drupal, I had become hopeful things might actually work out.

I was not familiar with the concept of open source before I started with Drupal, but I immediately felt drawn to the freedom it have you to completely make it your own and contribute back. Somehow, it triggered my ambitions and made me feel that I finally belonged somewhere. Drupal sparked my lingering entrepreneurial vibe and, as a consequence, the last 10 years have actually been the most productive of my life so far.

Drupal was a second chance for me and professionally I owe everything to Drupal. That’s the reason why I want to give back. During my first 5 years as a developer, I tried to contribute modules and patches. It was really difficult, but I managed to do some work. I always wondered why all these other guys managed to contribute so much code. I took me so long to even develop a single module and maintain it. Anyway, I tried to combine day job projects with contributing by reporting lots of issues. I also tried to contribute by sharing everything I learned on a blog, which at its peak had more than 10 000 unique visitors. During those first five years, I felt really connected with Drupal – in spite of the fact that I never once attended a DrupalCon in that period.

Why am I telling you all this background info? You’ll see later why this feeling of connection is actually the key for solving one of our biggest challenges.

DrupalCon as the spark to my business

At my first DrupalCon in Munich I met Kubair Shiradzee, who gave me the last push I needed to start up my own company, Dropsolid. I had been playing with the idea to start a Drupal company that would focus on building a Drupal-as-a-Service environment whilst paying for its development through doing regular Drupal shop work. It was extremely risky and I was hesitant to even ever start it. I was in a really well-paid Drupal freelance position where I was leading a team of Drupal developers. We tackled challenging projects and were having a great time. To start Dropsolid, I had to risk all my savings and leave a well-paid position. I really had to believe in Drupal: my entire future would depend on it.

Kubair inspired me with his stories about Ikonami (and later Peace through Prosperity). He told me that if I wanted to start a company, it would be better to do it right then and there. The circumstances were very inspirational: 1700 people were working on Drupal at DrupalCon, and Dries’ speech was very motivational. Having Kubair there gave me the final push.
In short, that DrupalCon in Munich proved to be a very powerful experience for me, connecting me even more with Drupal.

In the next five years, I worked very hard to make Dropsolid grow (see part 1 and part 2 of my blog). We launched Cooldrops, which provides an online marketing solution where Drupal is offered as service. We provide Drupal to more than 500 SMEs. We even hand out free websites to starting entrepreneurs. We reinvested all of the profits we made doing Drupal shop work (consulting, training, projects) to build James & Jenny, a platform-as-a-service development tool/hosting and multisite solution that is also the driving force behind Cooldrops.

We focused on serving the mid & lower parts of the enterprise market by helping them to build their capabilities to continuously improve on their digital experiences. They love Drupal because it solves a business problem for them. In an nutshell: "How to connect digitally with every individual customer". They love Drupal because they can now start small and improve in a lean way.

Mid-market companies do not have large marketing teams, so marketing platforms like Sitecore and Adobe require too much manpower for them to operate to achieve their ROI. They provide fantastic marketing tools, but these tools need to be operated at scale. Lots of companies simply do not have the necessary people on board to achieve the promised ROI. And that is where the chances lie for Drupal to become the platform of choice.

Another key advantage of Drupal is that the customer can own the solution. Sitecore and Adobe cannot be owned. If customers calculate how much the system costs them over a ten-year time span, the licensing costs are enormous. Also, the dependency on a single company for this core part of the business is very risky. With Drupal as a decentralised system, organisations never have to fear this. Owning Drupal for 10-15 years will only cost you hosting, implementation and maintenance, which is also a large cost in the total equation of the proprietary systems. Convincing the customer they keep building on top of their solution the next 10-15 years is a great argument to select Drupal. The long-term TCO is very beneficial. Governments have known this for years. The public sector and government sites in Belgium and the EU run almost entirely on Drupal to connect to citizens. Mid-market business are increasingly discovering Drupal as well.

However, Drupal is not a business solution out of the box. To leverage Drupal as a business solution, companies need a partner who can implement a predefined installation that has proven itself. We do this with our installer – this way, we match our competitors’ USP of flexibility, since flexibility carries no inherent value. The customer wants you to tell him how Drupal should be installed. The fact that Drupal has 15K modules that can do practically anything and everything, usually scares the customer. We provide insights, staff and tools on how to use a platform like Drupal. The added value of Dropsolid is to make Drupal available as a business solution. We do this by providing a holistic, all-round solution for mid-market businesses, so they can use this open system to develop their digital connections with their customers in a lean way. This effectively  creates a long-term solution, because organisations can use Drupal to build a digital asset and increase the value of their company. By using Drupal to create their digital marketing platform that forms the connection to their customers, they are able to extend their reach, provide better services, sell more and accomplish their mission and vision better. We compete very strongly against Sitecore and Adobe in our market.

I am sharing this info with you not because I am looking for a forum to spread the word about my company, but rather to show that it is possible to position yourself to be a valuable advisor to your customers. I think all Drupal shops can use these insights to do better business and promote Drupal as a business solution. If we speak as one voice more customers will hear us. We will have a bigger pie and all of us will benefit.

In part 2 of this series, I will explain how wecan unify business and commerce, as well as my view on the way forward for DrupalCon.